In October 2015, South Carolina (SC) experienced an estimated 1 in 500 year storm event [1], and 36 regulated dams failed as a result of the storm(2). The subsequent flooding due to the storm and dam failures resulted in 19 deaths, the closure of all highways in Columbia, and the closure of 120 km of the critical north-south Interstate 95 highway that connects the east coast of the US. Nearly 30,000 people were without power in the state. Damage losses were estimated at US$1.5 billion [2]. In 2016, 20 regulated dams in SC failed during Hurricane Matthew, and 11 more in 2018 with Hurricane Florence.

Aging dams and levees, in combination with an increasing frequency of climate extremes pose an unprecedented risk to communities around the world. The financial risk associated with the failure of such assets is unmapped, due in part to the complexity of the chain of events triggered by the failure of a major dam or levee, and of the difficulty of estimating the probability associated with such a failure. Just in the US, there are over 88,000 dams with height taller than 15 m, and a median age of ~70 years (Figure 1), well longer than the nominal 50 year design life of most of these structures. In 2016, the Association of State Dam Safety Officials estimated that it would cost US$60 billion to rehabilitate all the dams that needed to be brought up to safe condition [3]. 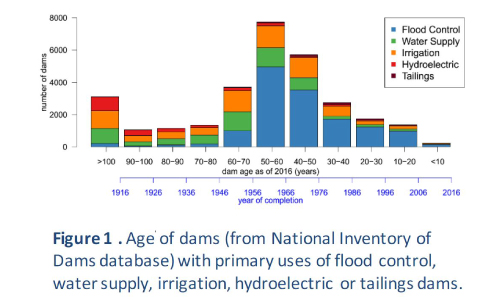 Nearly a third of the dams fail due to overtopping, an event whose likelihood increases as the potential for severe storms increases. The shear strength of a dam decreases with age, and as more of the reservoir fills with sediment, the capacity for flood storage is reduced. A dam failure can damage downstream assets such as thermoelectric plants, water and wastewater treatment plants, airport, bridges, highways, as well as other dams. The failure of such critical infrastructure can lead to a cascading failure of other critical services such as hospitals, emergency response, and supply chains. Immediate losses can include damage to life and property, but a dam failure can also lead to longer term losses related to access to water, flood control, electricity and transportation services [4], that go beyond remediation and reconstruction costs. Rigorous modeling of the mechanisms of dam failure and exposure is data intensive and time consuming. As a result, much of this risk is not priced and goes without discussion in the context of climate change, public safety, or financial risk management.